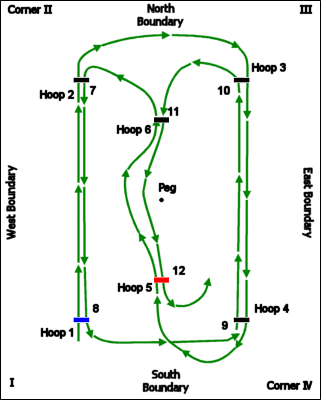 The opposing sides each have two balls: Black and Blue against Red and Yellow. A side may be one or two people (i.e. singles or doubles). Each side plays alternately in rotation: blue, red, black, yellow as shown on the centre peg.

Each turn consists of one stroke only: no extra turn is gained by running a hoop or hitting another ball as in Association Croquet. To start the game, toss a coin. The winner of the toss plays black and blue, and blue always starts.

The opening shots are played from within one yard of the corner nearest hoop 4, and the players aim to run the hoops in order from 1 to 12. A deciding hoop is run if the scores are equal at this point, making thirteen in all. Some games may finish after 7 hoops and other after 13 or19. The winner is the side that scores the most points out of the total hoops contested.

To score a point, a ball must run completely through the hoop. A ball has run a hoop if you can slide a straight edge down the front of the hoop without touching the ball. It may run the hoop in more than one go. If a ball should go through two hoops in order in the same stroke, both points are scored.

The side that first gets a ball through Hoop 1 scores that point and then all balls go for the next hoop in order (i.e. Hoop 2). All players must contest the same hoop. A player may proceed towards the next hoop before the previous hoop is run, however the opposing team may request that any ball which is more than halfway towards the next hoop, when the hoop is actually run, is brought back to specific half way points as specified in the detailed rules.

A ball that goes off the court is replaced on the boundary where it went off but will be temporarily moved if it interferes with the playing of another ball.

Any striking of a player's ball as part of a player's turn must be a clean hit and there are a number of faults that a player may make as he strikes the ball. These are defined in the detailed rules and are called striking faults. If a player commits any such fault all balls are replaced in their position before the faulty stroke was made and the player loses his turn.

If a player plays out of sequence and it is noticed before the opponent plays, the opponent may either have the balls left where they are or replaced were they were before the erroneous stoke, and the opponent then continues play with either of his balls. If more than one ball is played out of sequence before it is noticed, play continues in the sequence set by the last ball played, no balls are replaced. If a player plays the wrong ball, either an opponent's or his partner's ball in doubles, the balls are replaced in their original position or left where they lie, at the opponent's discretion, and the opponent continues play with either of his own balls.

To allow evenly contested games between players of different abilities the weaker player is given a number of extra strokes (called bisques) which can be taken at any stage of the game. However he may not score a hoop in a bisque stroke.