History of the Croquet Federation of Belgium

In 1994, two clubs saw the light, the Belgian Croquet Club and Brussels Croquet Club at Genval. The presidents of the two groups, John Swabey and Charles-Eric Vilain XIIII with others founded in 1995 the "Croquet Federation of Belgium" to develop the sport in the country. 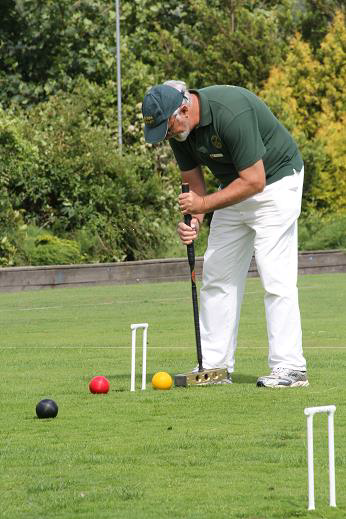 In 1996, the Croquet Federation of Belgium (CFB) organised the first International Open Championships in Belgium, based on 14 point Association croquet rules. Further international contacts followed in 1997, with the inaugural Coupe des Lacs (tri-partite encounter between Belgium, Italy & Switzerland), in 1998 the first Belgian Open in Golf Croquet, and the first participation of a Belgian nominee (John Swabey) in the European championships (in Southwick, UK) and in the WCF world championships, Jonathan Lamb (in Bunbury, Australia).

The CFB supported the creation of a new club in the suburbs of Antwerp at the Drie Eiken golf club but, unluckily, that club foundered inside its first 12 months. There was however a friendly international match there against a visiting team from the Netherlands, where a Belgian-resident Dutch national was lent to the visitors to make up their team numbers despite (or because of ?) the fact that he’d never played before. Later we played friendly international at Drie Eiken against Ireland and lost.

The CFB has also regularly organised an indoor open near to the Christmas holidays, taking advantage of the lack of other bookings for the carpeted conference rooms at first at the Pyramide (place Rogier, Bussels) and later at the Chateau du Lac.

The fact that many visiting players to Opens in Belgium were from various countries meant that conversation at the Saturday night gala dinner was difficult. This lead to a tradition of singing from printed sheets croquet-related texts set by John Swabey to “well-known” tunes, soon backed up by recitals of humorous poetry created by Jonathan Lamb.

In 2012 Koksijde built a croquet lawn and we were invited to demonstrate croquet during the official opening of the golf club where is is located.. We will help this year to explain how it works and to mentor its development. A weekend was organized in September 2012 with a few players from France, and the people from Koksijde showed themselves very enthusiastic .

In December 2012, the CFB sent a Belgian team at the World Team Championships of Golf Croquet, held in Cairo. Belgium was placed in Division 2 along with Germany, Norway, Spain, Czech Republic, Scotland, Wales and Latvia. To the surprise of everyone, Belgium won the silver medal, being narrowly defeated by Wales.

Mid 2012, we have been contacted by Japan to promote the game Gateball, a game derived from croquet and widely practiced in Japan, China and other countries around the Pacific. In Mid-October 2012, the Director of the World Gateball Union came to Genval to explain the sport.