If you need some help for croquet or creating a croquet club,
contact Bernard Thys at Brusselscroquet#gmail.com (for spam reasons, please replace # by @).

We have one club at present in the Federation (at Genval) plus another in the making (at Koksijde).

The Croquet Federation of Belgium (CFB) takes on a new look in 2013. John Swabey, the creator of the first croquet club in Belgium, has been talking with others over several months about introducing Gateball in Belgium.

Contacts were taken with Japan and the director of the World Gateball Union came to Belgium to teach us during the WE of 13-14 October 2012.

Some people were very happy to learn this game.

That’s why we try to put in contact with each other the World Croquet Federation (WCF) and World Gateball Union (WGU).

Bernard Thys organised a meeting in London on 29th January 2013 with , Amir Ramsis (Egyptian President of WCF) , Martin French (General Secretary of WCF), Keiichi Imagawa (WGU) and David Underhill (President of Swiss Croquet Federation and who has been travelling all over the world to teach croquet and more recently, also Gateball). 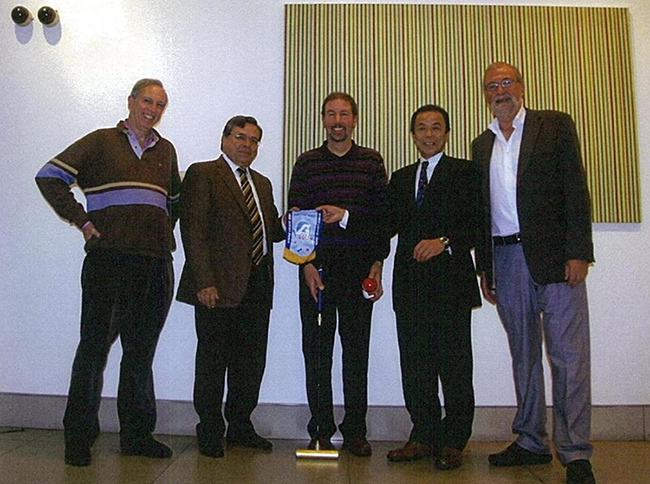 A lot of projects (tournaments) are in the pipeline. We are looking for people to develop this sport in Belgium. Once gateball is installed, it will be easier to promote croquet.

Ideas already exist how to proceed. Please contact us. An enormous challenge for a small country as Belgium. CFB has contacts all over the world.

belgiumgateball#gmail.com
(To avoid spams , replace # by @)